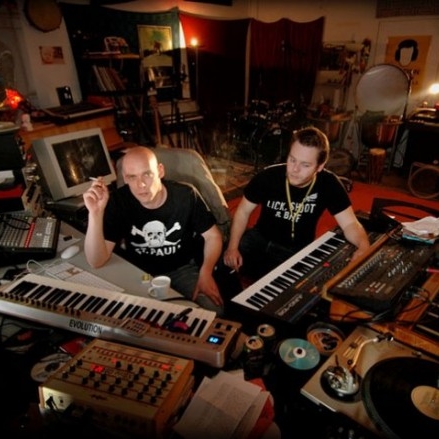 Seven League Beats (7LB) is a producer/composer duo from Zwolle, The Netherlands. Their work spans an eclectic range of genres. From musical hiphop productions, to sophisticated pop and full on synth scores for film, the duo effortlessly moves trough all kinds of musical landscapes.

7LB, or Rob Peters and Dries Bijlsma started working together in 2008 with a shared interest in bass music and futuristic beats. Starting out with electronic releases and touring with their own beats, Seven League Beats first started gaining attention when working on Typhoon’s critically acclaimed second album Lobi da Basi, and touring as part of his live band. Lobi da Basi won numerous awards such as; 3FM best hiphop, 3 Edison awards and earned gold status in 2015. During the same time they started getting traction in film and worked on the award winning short films Voorfilm and Démontable by Douwe Dijkstra.

Most recently the duo worked on the score for Tim Smit’s international sci-fi debut Redivider, starring Dan Stevens (Legion, Beauty and the Beast) and Berenice Marlohe (Skyfall). 7LB composed all original music for the film which is due for release in 2017. Also, under their own names they recently finished working on Bløf’s forthcoming album Aan, with Dries as main-producer and Rob as co-producer for the project.