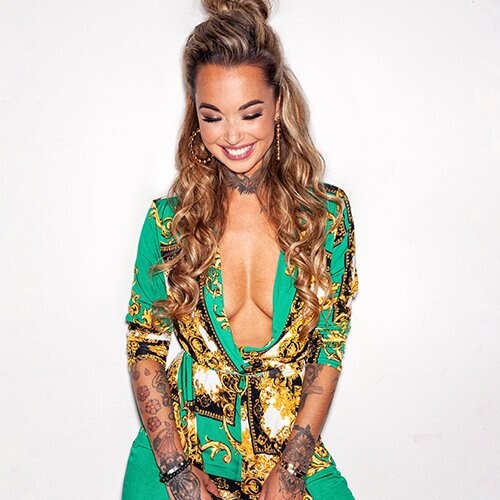 It’s hard to fathom that April Grey’s career has only just begun. After buying her first DJ-gear she taught herself to make and play music within two years, displaying a dedication bordering on the obsessive. As soon as she stood her ground behind the turntables she started editing her favorite songs, turning them into infectiously captivating urban mixes. Today, her talent is widely acknowledged and April has already gained all the traits of a seasoned veteran. With over 120 nationwide performances at clubs and events and an iconic residency at Vunzige Deuntjes, this self-taught artist is about to make it big.

Her funky, eclectic mixes draw heavily on hip-hop and R&B, but her love of music is broad and she doesn’t shy away from bass house or dancehall. April: “There are so many different genres I like. When I hit the gym I like listening to bass house. When I’m tired I switch to soul and jazz. When I’m behind the turntables I like observing my crowd and see what makes them tick. It’s their dancing and laughs that motivate me, so I try to feel their energy and adjust my music to it. It’s pretty amazing when you think about it. I just get to flip some buttons, a smile appears on people’s faces and they start dancing like there’s no tomorrow. In turn, that’s what makes me tick as an artist.”

With her “April Grey debut EP” scheduled for release this year, as well as some serious bookings at LatinVillage, Mysteryland, Tik Tak, and Dance Valley, be prepared for this multi-talented power woman to dominate decks and playlists alike.