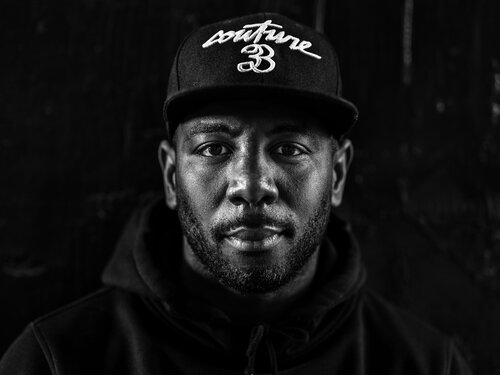 As a child of one and a half years old, Winne moves from the Surinamese capital Paramaribo to Rotterdam. At a young age Winne starts raping in English, initially under the name Static. He is encouraged by his friends to rap in Dutch, after which he takes the name Winne. He is guided by the experienced fellow rappers D.C.O. and also childhood friend Alee Rock, with whom he performs together at various locations in Rotterdam. Winne starts taking his talent more seriously from then on.

In the late summer of 2005, Winne suddenly became known to a wider audience. His number Top 3 MC, produced by Captain Mo, is released on the internet and is received very positively. A few months later, the track Pomp Die Shit! on the compilation album What’s da Flavor?!, what Winne means the definitive breakthrough in the Dutch hip-hop scene. His song ‘Top 3 MC’ appears later that year on the compilation album Homegrown 2005.

In 2006 he provided the Eigen Eigen album by the Zwolle-based band Opgezwolle with a contribution to the song Full Power. Winne can also be heard twice on the Rotterdam album by childhood friend U-Niq. In August 2006 Winne signs a contract with Top Notch, on which he will release his upcoming albums.

In 2007, his ep Invincible, a collection of songs that he already had, including Top 3 MC. He himself called Invincible a harbinger on his debut album. The ep is completely produced by Captain Mo, at that time the regular producer of Winne. Van Invincible has released three video clips: Pomp die Shit !, Like Me? and Don’t get me wrong (published in 2008). For the latter video clip, Winne wins a State Award in 2008 for the best video clip of that year.

In the year before, Winne himself was nominated for an Urban Award (the precursor of the State Awards) as the best newcomer. He also becomes the mentor of rapper Kempi, who had just signed a contract with Top Notch. He also delivers guest contributions to the mix tapes of the Eindhoven rapper: Rap ‘n Borie & Mixtape 3.1 and is also on the albums of Extince and Salah Edin.

In 2009 his debut album Winne Zonder Strijd is released. The production of the album is said to be a difficult process, because his relationship with Captain Mo is deteriorating. In an interview with House of Hiphop he says about this: I had recorded quite a lot of tracks with Mo, but at a certain point that was canceled. At the time, I felt like, “I now have to look for beats for my lyrics.” When I started looking for this, I was disappointed every time, because I missed that magic. Eventually Winne will collaborate with producer Concrete, who produces almost the entire album.

Video clips are being shot of the songs W.I.N.N.E, Lotgenoot and Everything I want. The number W.I.N.N.E. contains a sample of the track Uncle Remus, by Frank Zappa.

A remix is made of Binnenvetter together with Akwasi (of Zwart Licht), Typhoon and Fresku. He also makes Superster’s remix with Jiggy Dje.

At the end of 2009, in collaboration with Patta, he released a collective mix tape called; So So Lobi. It includes songs from Extince, Zwart Licht, Jiggy Dje, Lange Frans, Kempi, Gers, Rico and Sticks, RBdjan and many more. Winne is also on the album with the song We Are 1, for which a video clip is shot.

In 2011, Winne is one of the participants of the first season of the TROS program Ali B at full speed. In this episode Winne is linked to Henny Vrienten from Doe Maar. Winne, with the support of Ali B, makes a remake of one of the biggest hits of Doe Maar: 32 years (Since 1 day or 2), the number with which Doe Maar breaks through with the general public in 1980. Henny Vrienten makes a remake of Lotgenoot (2009).

On March 23, 2012 the mixed track ‘Geef Acht’ from the hardstyle DJ Headhunterz will be released after a long wait by the hardstyle fans. Part of this song is played by Headhunterz at the hard dance festival Mysteryland on August 23, 2011.

In 2013 the album Greatminds is made by Winne, Sticks and Jiggy Dje. Together with producer Dr. Moon is working on the album for a while in Paris. Winne travels around the country with the group for various performances.