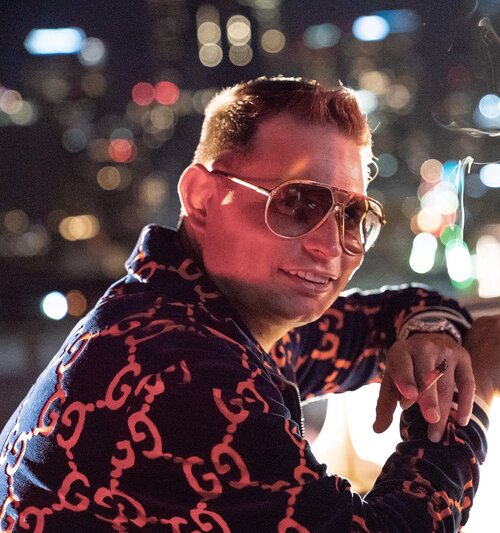 Some of the biggest turning points in popular music stem from one lifelong musician behind a piano.

During 2017, he embarked on a much-anticipated return to music chronicled by Billboard and more. As a testament to his legacy, he notably emerged victorious during an internet-breaking VERZUZ showdown with Mannie Fresh.

However, 2020 also marks a first in Scott’s esteemed career—the launch of his solo music with the single “Fuego del Calor” [feat. Ozuna & Tyga] and a full-length debut album.

Yet, it all comes from the same place…

“I’m a self-taught keyboard and piano player,” he states. “Since I’m self-taught, I have a style of playing that speaks melodically and rhythmically. I play the keyboard very percussively—almost as if it’s a drum. I hear rhythms just a little differently. It’s something I’ve tapped into. It’s in my soul, and it comes out of my fingers.”

At 10-years-old, he gravitated towards a broken and old upright piano in the living room of his Florida home. Listening staples like the Motown 25th Anniversary tape on a mini-cassette player, he slowly but surely taught himself how to play by “imitating those feels.” Moving to Philadelphia at 15, he endured bullying at school and “just stopped going to focus on music.” After an audition for The Roots, he joined the hip-hop collective as the keyboardist and producer. Following classic albums Organix [1993] and Do You Want More?!!!??! [1995], he departed from the group to focus on his career in the studio. The floodgates opened following “Still D.R.E.” as he ignited an unbeatable decade run highlighted by the likes of Gwen Stefani’s GRAMMY® Award-winning “Let Me Blow Ya Mind” [feat. Eve], Chris Brown’s “Run It,” Christina Aguilera’s “Fighter,” Mario’s “Let Me Love You,” and 50 Cent’s Billboard Hot 100 number one “Candy Shop,” to name a few.

However, darkness followed him to the top.

“I let a particular crowd introduce me to a lifestyle of partying on South Beach, drugs, and pure madness,” he confesses. “I got through all of the struggles though. Now, I’m inspired to fight and get back to the throne. It’s the fuel for this new era.”

Kicking off this new era, he commences his career as an artist in partnership with Atlantic Records. As always, Scott pushes the envelope once again.

“I try to be a pioneer in anything I do,” he affirms. “This is something I overlooked and should’ve done years ago. Getting sober, putting my life together, returning to music, and laying myself on the table, this was the next step. I wanted to do something to go beyond what you’d expect from me.”

That’s exactly what he does with “Fuego Del Calor.” Hummable production and an airtight beat bounce underneath verses from Ozuna as the keys sizzle alongside incendiary bars from Tyga. Meanwhile, the sizzling Spanish hook takes hold tight.

“I had to seize the day with the first single,” he explains. “I wanted to do a big global record. Tyga has a great presence around the world. Ozuna is a legend. They came together on the perfect collaboration. Lyrically, it’s about something hot. It’s rare to get a record with this sort of magnitude out of the gate for a freshman project.”

As he preps his debut album, he also opens The Heavenly Center (THC) in Los Angeles, CA. This 200-person treatment facility utilizes cannabis in the recovery process for addiction.

“My wife helped me quit doing drugs and recommended I start smoking weed,” he says. “It never harmed me. It cured me and helped through the anxiety of kicking cocaine and other things. Because it worked, we wanted to open up The Heavenly Center to help other people recover in a healthy alternative way.”

In the end, Scott Storch is still behind the piano and ready to change the game again.

“I’m just a more grown-up version of the same guy I always was,” he leaves off. “I’ve learned a lot of lessons. I’m thankful for the air I breathe and the simple things like my family and my son. Fulfillment comes from the drive to be a winner, because it’s in my blood. It’s my whole life. When you hear this, I hope you think, ‘Scott Storch still has that fire’.”